I’m faced with the opportunity to either work on the post that’s in draft status, work on my novel, work on editing, go frolic in chilly weather, or continue to sit on the couch and start something new. Guess what I chose!

Anyway, I was thinking about all the supremely stupid things I do during the week, and I came to the conclusion that most of the things I say are incredibly stupid.

The Simon Reaction to Social Situations

Sometimes they make me come off as arrogant, pretentious, or worthless. I’ve got enough self-esteem to put myself in none of those categories, but that doesn’t mean that, somewhere in my genetic makeup is the following:

NOTE: It’s been a long time since I’ve coded anything properly. Don’t try to put that into any programming language, please.

How do I know this is a genetic thing? Because my Dad has the same problem I do. (For example: He once called me up to tell me about how he insulted an old lady by insisting that the person in front of him was served before the old lady because, “Holy shit, she was scary.”)

So nu, I was in the kitchen, shouting randomly, because that’s what I do when I’m alone in the house (the dog doesn’t seem to mind), and I realized that, hell, I might as well start putting these up on the site. After all, I’ve got no distractions around and if I just sit around watching Seinfeld clips, as I usually do on a lazy Sunday afternoon, I’ll feel guilty for not having done anything during the day.

So, in no particular order, and reaching back in time just a bit, here’s a non-exhaustive list of stupid/pretty mean things I’ve said over the past week. If any of you have the ear of a deity, you might want to tell him/her/it that this is my way of confessing, and they should not banish me to a hell/limbo.

What I Said: A coworker was talking about one of their clients being a hassle.

Why This Is Stupid: Well, it’s pretty obvious, I’d reckon. “Kill em” is my generic reaction to any problem that comes up. “The guys next door voted Republican.” “Kill em.” Or “I’m really having trouble understanding this kanji.” “Kill em.” It’s a filler that should remain locked in my head until I come up with something remotely intelligent, but, more often than not, spews out of my head like something from a stupid hose.

I imagine Bill O'Reilly's head to be a Stupid Hose. 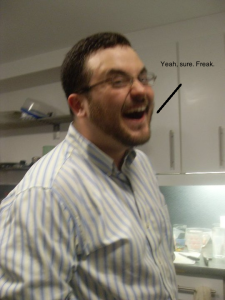 Why This Is Stupid: This is one of those things that happened a few weeks ago, but it’s also a story I will never tire of telling. I was on the bus on the first day of my new job. This was around 7:30 in the morning, a time that I will never like, with which I will never go frolicking in the green fields of France, nor have offspring with. Despite the fact that I’ve been getting up at 5:30 for, more or less, a couple of months now, I still consider 7:30 to be Godawful. I don’t function well at 7:30, and I view anyone who does to be a sociopath.

Which is why, on that fateful day, I immediately hated everyone who got on the 24x bus to downtown Nashville from Bellevue’s MTA Park and Ride. They were a chattering mass of happiness, probably filled with the love of God and with their peanut butter sandwiches wrapped up in brown paper bags–because everyone I despise is Ned Flanders. The woman who sat next to me on the bus, a middle aged woman who, in my addled vision that morning, was a bleach-blonde-haired screeching harpy, but who was probably a lovely person, had a wide grin plastered on her face. The sort of grin that would make the Joker proud.

When it came time to disembark the bus, right outside TPAC, most everyone stood up and waited to leave the bus. They’d all been talking, and I’d been sitting in my seat, as close to the fetal position I could get, clutching my thermos full of now-lukewarm coffee, and trying to avoid interaction with the happy people. She turned to me, even though I clearly didn’t want to to talk, and said, “Have a nice day!”

For whatever reason, I thought I could get away with saying, “Thanks, you too.” I had, of course, failed to take into account that I can’t generally order a coffee until at least 8:00, and thus thought that the “freak” I tacked on to the end of that sentence in my head would stay buried in my head instead of coming out as a side-speaking murmur. Ma’am, I’m sorry.

It should be noted that no one has talked to me on the bus since. So that’s a good thing.

"Are you fucking with me, man? He thought that was a good idea?"

Why This Is Stupid: I spent a year in England, okay? I’m still getting used to the fact that this is a country in which it is completely acceptable to drive in your Ford F-15o to the gun show to buy a modified rifle with cash.

I was out at a sushi bar with a group of people, and good times were had. Except for the point at which I murmured, “If I don’t get out of here and away from this fucking hive of techno-listening yuppies, I’m going to snap” in an apparently audible register and 1) Made Brad a little freaked out, 2) made Andreena laugh, 3) and continued making a very weird first impression on Hector. (NOTE: You probably don’t know these people. That’s okay.) After, we determined that, Brad’s lack of sleep and encroaching exhaustion be damned, we’re gonna go get us some ice cream!

We drove out of The Gulch–Nashville’s wretched hive of scum and villainy–and went down towards Hillsboro Village, near Vanderbilt. There was a Ben and Jerry’s there, and, damn it, I hate money and like to throw it away with reckless abandon. Ben and Jerry’s was closed at 10:30pm, because they’re reasonable people and like to get a nice night’s sleep on Fridays, so we went to Starbucks, where we engaged in aimless conversation.

At one point, we started talking about family members, and Andrew mentioned some family drama that came about when his Dad wanted to buy his nephew a hatchet.

An acceptable gift in The South

This is about the time I said that stupid thing–did I mention the gift was for a six year old? Now, I believe my reaction was logical, that it’s a Bad Idea to give a kid a murder weapon. However, I failed to remember that I’m in The South, a magical land of grits and shotguns, and that my views as a pacifist socialist Jew aren’t, from time to time, agreed with. The way I should have reacted was with a high-pitched “Huh,” and then tried to bridge the gap. Perhaps with something like, “I played Wolfenstein when I was six for ten minutes, then my Mom took the controller away and said it was too violent for me.” (This is true. It is also true that I would dive-bomb a cathedral in the N64 game Pilot Wings while shouting, “This is for the Holocaust!” Divorce did some odd things to me.)

Why This Is Stupid: First of all, it’s not my title. Don’t ask what my job title is, because I don’t know it off the top of my head. It’s a fluff-piece, and one that sounds important, but basically boils down to “DHS Bitch,” which is more truthful and more crass, which I appreciate.

Anyway, I was on the phone with a representative from my old frat, Alpha Epsilon Pi, aka Jew House, and they were compiling information on alumni to put in a yearbook or something like that.

Or, you know, a massive government database masquerading as AEPi

So they sent out a postcard on horrible looking yellow paper asking, basically, “Dude, we haven’t heard from you, what’s up?” Being somewhat friendly (this was the afternoon, and not the morning, so everything was kosher), I decided that I’d let them know. The question about employment came around, and I gave my answer. The lady with the cute voice on the other line said, “Ah. Okay. Sounds nice.” I responded with, “Meh,” and a semi-awkward silence reigned.

"I send files and get annoyed at people."

Why This Is Stupid: You guessed it, this was regarding work again. I was at a bar, talking to a pretty lady, in full-on, Damn It, Aaron, Be Cool Mode.

My model for cool

Because this was a Jewish social event, the topic of employment came up. (I’m not bending to stereotypes, here. The Christians have Jesus to fall back on when there’s a conversational lull. Other demographics have other things. Jews fall invariably fall back on “You working?” The last episode of Bored to Death had a person Jonathan Ames was talking to ask if he was Jewish, and when he said yes, she said, “Good. A steady source of income is nice.” It’s in our genes to be nerds and kinda square.)

I couldn’t tell you what her job was–from what I gathered, it was to be the Angel of Death at a hospital–but I decided that I’d try and be self-deprecating when she asked what I did, and instead of answering with “I’m a writer/director,” which is kinda true and is guaranteed to get you laid*, I responded with the above. She nodded and walked off. I don’t blame her, it was a pretty stupid thing to say.

Anyway, I’ve just about run out of stupid things to remind myself about, and if I try to think back about more, I’ll wind up going through my life and thinking about all the myriad times I’ve gone around and done stupid shit, and then I’ll drive myself to The Whiskey, and that’ll be awkward, cause I still live with my mom. So, instead, reading. HOORAY SUNDAYS!