On Spider-Man As A Minority 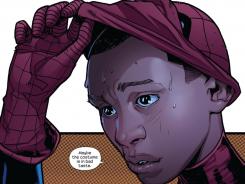 I could take this time to comment on the coming implosion of capitalism as corporate America hires less and less people and makes more and more profit. Or I could use this space as a way to discuss the worrying trend of having a Presidential candidate whose husband is so closeted he needs a walk-in.

But I’m not going to.

I’m going to talk about comics. Because in a world this batshit insane, in a climate this crazy, it seems like Marvel Comics is the sanest thing around.

See, while the company has recently developed the eyebrow-raising maneuver of revealing major spoilers to the mainstream media, seeing a bunch of people who habitually wear capes and are famous because of their alcoholism and psychotic breaks makes more sense than this shit.

Last night, I saw Man of La Mancha. While I’m still ambivalent towards musicals, there was a great bit of dialogue in it where Cervantes has a mini-monologue about how the world is so horrible that, sometimes, diving into a world of fantasy is the only sane thing to do. I’m inclined to agree with him. The country–and definitely the world–seem to be spiraling to a point where we almost need a deity of some sort to pop down to Earth, smack us in the face, and go, “No.”

So I turn to comics and video games when I get too tired of hearing about the shit going down in Washington, The Hague, or, oh yeah, Somalia. And, you know, it’s all good. The most controversy there seems to be in the comics world is what’s up with Supes wearing jeans.

That is, until Glenn Beck apparently hears about what Joe Quesada and the rest of Marvel are doing.

Before I begin, allow me to educate you–and Glenn Beck, because, as usual, he doesn’t know what’s going on–about the way Marvel handles things:

Nah, kidding. Here it is:

Everything started from scratch in the year 2000, when Marvel launched Ultimate Spider-Man and Ultimate X-Men. It was still Peter Parker behind the mask, but he, a shagitz, seemed to oddly develop a penchant for using Yiddish slang.

This was too cool not to use. Michael Chabon as Spider-Man.

And they started most every other series from there. It’s all great fun because–hey, they’re comics. And the only sorts of people who take comics as A Serious Art Form look like this.

And now, Marvel’s decided to go about mixing up the comics world even further by killing Peter Parker. It’s a bold move–and we’ll see if this is another case of Comics Death where a character dies and returns a year or so down the line, if it’s For Real Death. (Jury’s still out on Human Torch, as far as I know.)

But even further bolderly, they’re making the new Spider-Man a half-black, half-Latino kid named Miles Morales, pictured above. Perhaps not surprisingly, the right wing lost their shit. In the words of my inimitable friend, Jon Lim:

It’s this kind of absurdity that makes me weep not only for the comic book industry, but for the United States of America on the whole.

True that, my friend. Beck has gone on record stating that this is part of the Obamas’ plan to “sublimate white America.” Yep, he’s got it nailed. They wanna destroy whitey by taking over Peter Parker. It’s nuts, really. If you wanted to make that case, wait for DC to answer by retconning Superman’s home planet to Af’rica, or something.

But, as Jon noted above, it’s not particularly surprising.

What is surprising, though, is their lack of research. There are so many other superheroes the right could flip out about. Here are three.

Holy shit, look at that guy. That's one big bag of black fury right there, isn't it?

Luke Cage–aka Power Man–grew up in Harlem (red flag number one), was experimented on while in prison, and has no clear morality, being a mercenary.

Holy Christ. You know this guy’s gonna go around Wall Street punching white guys one day, don’t you? How could Marvel publish this stuff? Why would they publish this stuff? Well, clearly, it’s to further a black power agenda and make honkeys everywhere shake in their boots.

And experimenting on African-Americans against their will. That sounds… strangely familiar.

Holy latex! Even more frightening than the last guy!

Wow Marvel, are you even trying to disguise your hatred for white America?

Sure, you might try to say that “Well, this is actually a title given to leaders and protectors of the fictional nation of Wakanda, and has nothing to do whatsoever with the extreme fringe group.” And sure, maybe your sycophantic fans could back you up with tenuous things like facts, but you and I both know that that’s a lie. [citation needed]

And what’s that? He’s getting a new uniform? Let’s check it out.

Holy military boots! Look at all those pouches! You know what goes in pouches? Bullets. For killing white people.

(In all seriousness: Who designed this? Rob Liefield? No, there are normal feet. Not Liefield, then.)

Is that a… pentagram on the floor?

Marvel, do your depraved depths know no bounds? Oh, sure, you may say that Doctor Strange fights demons, but you and I know that’s just a liberal ploy to get our God-fearing Christian children to turn to a life of DARK MAGIC worship!

And another thing: Where did he get his PhD, huh? I can tell you. You ready for this, America? He got it from HAU. Hating. America. University.

Marvel, you sicken me. Next you’ll have a Jew as a superhero.

2 thoughts on “On Spider-Man As A Minority”