Moving to The South

I have a lot of problems with The South. Anyone who’s known me for more than a minute (or, in some cases, has seen me on facebook and nowhere else) can tell you that I’m prone to a long, rage-filled diatribe at the mention of grits, Garth Brooks, Strom Thurmond, South Carolina, Southern Baptists, South America, or the little-known Hitchcock film, South by Southeast.

One of the many things I despise

There’s a good reason for it–one that’s not xenophobia. See, there was a time when I didn’t live in Tennessee. When I lived in a region of the country that had seasonal weather and did not look on Democrats as a scourge to be smote by the power of the Tea Party. This place, which, I’ve learned, is heavily romanticized in my imagination, is Ohio.

How I see Canton, Ohio in my mind.

And then, as it tends to happen, the Universe sneezed and my Mom, dog, cat, and I moved to Smyrna, Tennessee to live with my grandmother.

You probably don’t know about Smryna, but that’s okay. Most people don’t. Since there’s no representation of the town close to how I remember it, I’ve taken the liberty of drawing an AaronMap ™ of the town. Before you ask, no, it’s not to scale. And no, it’s not really in the shape of what the town looked like. 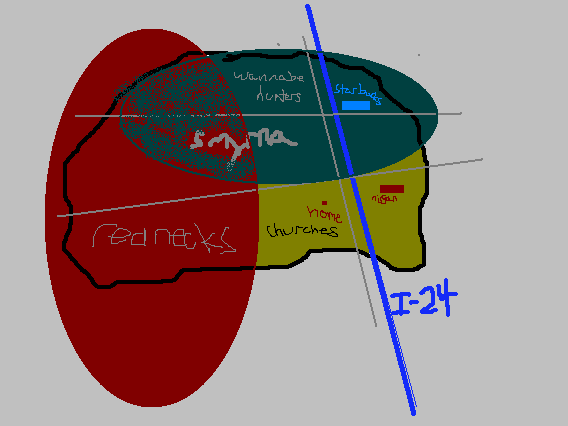 And that’s when the fun began.

Before I moved to the South, I was viewed as a Southerner by my Ohio classmates. See, I was born in Houston. So, yes, technically that makes me a Texan. We’d joke about it, especially when we learned about the Civil War in the second grade when my friends and I would shake fists at each other, but, by and large, people knew I’d only lived there for the six months of my life, so it really didn’t count.

But then I moved to Tennessee, and, while I was first looked on as an oddity because I had studied long division the year before and I had a different accent, it came to light fairly quickly that I had been born in Texas. At which point the relationship changed from:

I found it strange, but this was before I discovered the joys of being snarky and using obscenities. I dealt with it in the way I usually deal with things when I don’t understand/would rather scream “Do not want!”: I laughed it off. (This method of dealing with things may make me a better person as I don’t walk around punching people and/or things, but it does lead to some backfiring from time to time.)

Before I continue, and, in doing so, start on a tirade that will make me seem to some like Gen. Sherman, I’d like to state that I have made great friends down here and the South isn’t all bad. There are good things here, like biscuits and the fact that the homeless can sleep on the streets without freezing in the winter. Also, many famous and important people and scientists have come from the South, like… several important people, I’m sure.

That said, one of my favorite stories to tell starts when I moved down here and was on the school bus. The bus I rode was driven by a woman who had apparently known my grandfather. (This wasn’t a rare occurrence in Smyrna; my grandfather was an Air Force guy in an Air Force town, had run for mayor, was in the Rotary Club, and knew the head of the Nissan plant. He also brewed his own beer and sold goats as lawnmowers.) The bus driver was large, had frumpy brown hair, beady eyes, and gigantic round glasses. She would say something to me every morning as I got on the bus and waved my Grandma away (she insisted on driving me up the driveway because she was convinced that coyotes would eat me), but I can’t remember a word of what she said. Think Boomhauer on King of The Hill, but with a drawl.

See, there were two buses that went by my house – for reasons I’ll never understand, they split the same route up between two school buses, and one of them was the one that picked up all the kids whose parents drove nice cars, and the other, the one on which I rode, was the one that picked up the kids whose parents drove the not so nice cars. After telling my Mom that I wanted to ride the other bus – the one that had all of my friends on it – and getting a guilt trip that I’d be insulting a family friend (though none of us knew her name) I eventually managed to get on the other bus, where one of my first encounters with Smyrna’s insular nature occurred.

I was on the bus, specifically on the bus from school back home, a route that would take all of the students from the middle school through Smyrna’s town center (an abandoned railroad station and some car shops) and into our neighborhoods. I was sitting next to a girl I liked at the time, and the guy in front of me, who is now a good friend of mine, popped up and said, “Hey, you’re Jewish. Do Jews use electricity?”

How my friend used to envision Jews at work.

I can peg it as the question that initiated the change from mild-mannered, clean-cut kid into the mild-manned, clean-cut, cursing and Guinness-loving guy I am today. It was at that time that a part of my mind realized, or began to deceive itself into believing, take your pick, that the only way to combat the ignorance (for it was ignorance, and not stupidity) of this Church of Christ- and Baptist-centric, red stateness of the town was to treat them with derision. (This is also why my nickname in high school was The Angry Jew. Go figure.)

Shortly after that – and I mean shortly, like within two years – I was answering legitimate questions like “What do Jews do at synagogue” with shit like “We sacrifice Christians to the Pit of Snakes.” I would feel very bad about this, were it not for the fact that several people took me seriously and told their family members that Jews killed people with snakes. In my opinion, it is the school’s responsibility to teach critical thinking so when a burnt-out guy who’s tired of answering the same question fifty times a week says stuff like that, the asker won’t be confused into thinking it was the truth.

At any rate, it so transpired that we, the students, graduated to high school and suddenly, those of us in the top 10% or so of the class discovered the pissing matches known as politics and economics. (As far as I could tell, the rest of my graduating class starting learning to beat box around this time. Different strokes, I guess.) This led to a lot of the class starting to vehemently echo the prevailing Smyrna wisdom that George W Bush was the best thing to walk the planet and that Gore was a nancy boy. (When the 2004 election rolled around, Kerry turned out to be Satan. Go figure.)

Understandably, this made me angrier, as I was in the same house as my grandmother. My grandmother resembled Yoda in more ways than one. While she wasn’t green, she was small and ornery and pretty smart. On top of that, she was steadfastly liberal in all of her views.

This made me laugh as, years later, my Uncle Mike would refer to my late grandfather’s politics as “slightly to the right of Genghis Khan.”

At any rate, her ideas rubbed off on me. I started thinking that Stalin wasn’t such a bad guy and Lenin got a bad rap. (This was, of course, before I learned of Stalin’s many transgressions against basic human decency.) I may or may not have started to refer to my friends as “comrade,” and saw my swaggering Republican friends as the biggest threat to America since the Civil War. Looking back, I realize that I really needed to just calm down. Of course, my reaction at the time, as I mentioned before, was to write a misanthropic tract.

You might say that this was an immature thing to do, and I should have come to terms with the bizarre extracurriculars of my classmates, and I would say that, yes, this is true, but damn it, I got some good jokes out of that thing.

The way I understand it, the only reason I’ve not been launched into utter cynicism and hermitude is because I went abroad for a cumulative year and a half during undergrad. Were it not for that glimpse into the reality that there is a vast proportion of the world that does not see life as revolving around guns, Jesus, and Bud Lite, I would be a different man, indeed.

2 thoughts on “Moving to The South”