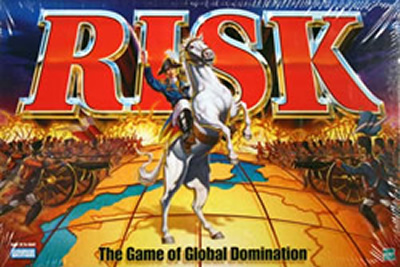 My infatuation with this game started several years ago, when I was nought but a nerdling, convinced that the world only extended to the expansions of WarCraft 2 and Diablo 2. Every year, Brad’s family would rent out a couple of camp sites in a state park and a whole bunch of us would retreat into the woods for a weekend full of bacon, doughnuts, awkward moments, and thanking God we weren’t actually camping.

See, the camping we engaged in was camping in Easy mode. There were tents, there were sleeping bags and, from time to time, there were camp fires. But there were also showers with hot water, electrical outlets, trash pick-up by park rangers, and a playground on a hill just across from the sites. The usual things that go down in camping trips didn’t go down here, since we were all civilized people and appreciated the outdoors just enough to be slightly uncomfortable for a couple nights a year.

During the days, we’d all do whatever we could think to keep us from missing things like TV and the Internet. For the kids, we’d mess with the dogs or heave rocks into the lake and cheer like Neanderthals. The adults… I don’t know what they did. Something boring. Like reading or some shit.

But at night, we’d all come together for one, massive Hate Fest. There’s nothing like these things, and, chances are, you’ve experienced them yourselves. What corn-fed American family hasn’t played Monopoly, thinking it would be a great way to rip the kids away from the TV for a few hours and actually talk to their parents, only to find, after Rick Jr. keeps buying up all the fucking orange properties and not fucking trading them even though someone’s offering the goddamn green properties and Susie, for whatever reason, doesn’t grasp that it’s in her best interests to just buy her fucking way out of jail instead of rolling, and Dad, that shit head, keeps double-dipping in the bank like some investment banker, and Mom guilts you into not buying Park Place.

[clears throat] Sorry. Monopoly, as you’ve probably grasped by the above, is the perfect entry into American Hate. A baptism of resentment that won’t fully blossom until higher-level board games like Balderdash are played. But there’s one game that rules them all, and in the darkness binds them: Risk.

Risk combines two things that are extremely important for the person who wants to truly hate those around them.

First, Risk allows a person to operate under the illusion that they have a plan. This plan of theirs will do nothing less than lead them to world domination. Imagine! What are the things you would do if you ruled the world? Would you make Siberia into a theme park built around your memories of snow days? How about making everyone in Paris wear boxers on their heads, for no reason other than you are The Supreme Ruler of The World. All of those fantasies (and more!) can be yours if you win in Risk. And, let there be no doubt, you will fool yourself into thinking that your plan is foolproof. It doesn’t matter if you plan to start off in Australia, Africa, or South America, you will, within the first ten minutes of opening the box, have completed a full-on step-by-step dramatization in your head of everything you would do if you were the ruler of the world.

I don’t care if you’ve taken a religious vow that, no matter what, you shall not harm another being on the planet Earth, if someone came up to you and said, “There are only five people who are capable of controlling the world, and you are one of them. Good luck,” then you would step up to the plate, draw up an army, and carve a bloody path to world domination. That right there is what happens when someone suggests a game of Risk. The basest, most violent aspects of a person’s personality pops up, and all Hell breaks loose.

Second, Risk manages to pull a complete one-eighty and shoot that right in its face with the whole chance aspect of the game. The first, obvious remark to be made about chance in this game is that you’re dealing with dice as a representation of battle in war. Dice is the best way to simulate war short of handing combatants guns and saying, “Have at it.” No matter how well you’ve planned your game, a simple string of bad throws will derail your plan and send you crying to some Godforsaken territory like Madagascar. And there’s no way to stop it, either. No matter how many times you practice rolling, the dice will always bite you in the ass.

And the second way chance throws a wrench in the works is by virtue of, well, playing against other people. Take, for example, the case of a friend of mine named Will. Will, as I’ve mentioned elsewhere, meticulously plans, schemes, and connives, so much so that I’m sort of certain he’s a robot. One game, Will had planned out his strategy completely, was on the verge of winning, and was celebrating that fact, when I decided I didn’t want him to win and kamikazed right for him.

His reaction to seeing the loss of every continent he’d held and, roughly, half his armies on the board, was, “Why would you do that? That was illogical.”

Risk, like any good game, will prove the point that no human is logical. That’s why Gene Roddenberry had to invent Vulcans to counteract the humans in the Federation. That’s why you’ve got the Jedi countering the Sith. That’s why computers will always beat you at chess.

And the end result of that incursion of chance on your meticulously-organized path to dominating the world will be that you hate everyone around the table just a little more.
And so, as I don’t really have anything better to do with my life, I’m going to guide you, Dear Reader, into a cautionary tale. I shall be the Virgil to your Dante, and our setting shall be the glorious board game that is Risk. For, just as Dante’s Divine Comedy had its Inferno and its Paradiso, so too does Risk carry with it rage, but, more importantly, glory beyond your imaginings.

Have no pity, Dante, for he rolled three ones in an attack on Ukraine.

Our journey, though, will not take place in the abstract. This shall not be an academic discussion. No, this shall take you through my history of addiction. A confessional, if you will. And, occasionally, it will have pictures–so that’s always good.