It’s time to come clean about something. As you might suppose, I’m really, really hesitant to do this, since I’m not proud of the things I’ve done, and I wouldn’t expect anyone to sympathize, or empathize, with my actions. I apologize to all of my friends and family for the actions which I have committed, and their repercussions, which have changed the fabric of my life, and the lives of many others, for years to come. Until I saw the consequences of my actions come to fruition, and the lives of many drastically altered by them, I did not believe that anything one person could do would have an effect on the world, but, well, there you go.

I am responsible for the recent uprisings in the Arab world, as well as every incident that led up to them.

It all came through when I found my first time machine sitting around in Centennial Park. Everyone passed by it, and, judging by the way it looks, I can understand why. Here, I drew it for you: 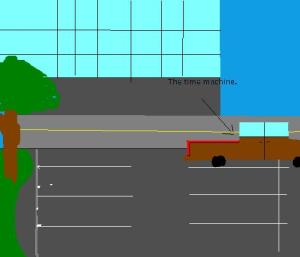 But, you know, I’ve got hoarding tendencies, and even though it looked like it wasn’t good for anything other than scrap metal, I decided I’d take a chance with it. Nurture it. Turn it into something better than it was before. Sort of like how I one day hope to impart legitimate emotions and logical thought processes unto Glenn Beck.

So I got in the heap of nuts and bolts and pressed the red button on the Eastern European proximity of a dashboard. Suddenly, the universe started melting. The homeless guy with a beard who always hangs out on the porch swing next to the pond melted into the ground, absorbed, like rain into a drought-ridden area. The duck and goose island in the center of the pond expanded, stretched out, as if it were an image on Silly Putty.

Inside what I had taken to be an abandoned Yugo, I shit myself in mortal terror. (This is one of the things of which I am most ashamed.) Judge me not, for if you saw yourself melt into a puddle, and that puddle merged with what used to be a pile of dog feces, you would do the same. After all of the world’s colors combined into one, giving birth to a color not imagined by Man, something akin to white, but not white at all, I heard a BANG, and the world resumed its normal status.

However, I was no longer in Centennial Park, sitting in an abandoned Yugo. I was in Cairo, many years ago. I saw newspapers strewn around the street, but could not read them. (Give me a break, my Arabic’s really rusty.) People were in the streets, listening to a speech given to a man I could not see. Next to me, perplexed by my sudden arrival, was an extraordinarily British-looking man. Think Alan Quartermain from the League of Extraordinary Gentlemen comics and you’ll get it.

“I say,” he said, adjusting his monocle. His mustachios twitched in confusion.

“I say, do you not have any comprehension of current events?”

“Apparently not,” I said.

“Mubarak is addressing the crowd.”

He talked further, but I was really, really bored by now. There happened to be a can of red paint nearby and a blank wall near that, so I went over to the can of red paint, picked up the paint brush right next to that, and went to work.

When I finished, I stepped back to appraise my work.

“How lewd,” said the British man.

“MUBARAK IS A POOP HEAD,” read my work.

I then tipped my hat to the man, hopped back in my Yugo/time machine, and pressed the red button.

The world began to melt again, and this time, I vomited. Once again, don’t judge me.

And then, earlier this week, I watched the news and saw as Egypt–a country I’d always assumed was really, really stable–started revolting. First, I thought, “Man, I really need to pay attention to Middle East politics more.” Then I saw some writing on signs and walls. Curiosity took over, and I downloaded some of the pictures, printed them out, and showed them to Sammy–my mom’s boyfriend from Cairo.

He looked at me weird (but, to be fair, he looks at everyone kind of weird) and said, “The signs say ‘Mubarak is a poop head.’ This is the phrase of people who do not like him. Why?”

So, yeah. I’m kind of responsible for the whole anti-Mubarak movement. Sorry for displacing a key ally in the Middle East, guys.

But what about Tunisia? Welp, once again, my bad, guys. I was drunk. I didn’t know what I was doing, and I thought it would be a really cool idea to take the Yugo for a spin. Fuckin Manischewitz, lemme tell ya.

I pressed the red button, hurled, and found myself in daylight in a market in some place hotter than Hell. I tumbled out of the car and looked up to see a police woman and a kid arguing over an avocado. From what I gathered, the police woman was saying the kid was overcharging her, the kid accused her of responsibility for killing his friend, words were heated, fists were shaken, and then the police woman stalked off.

The kid was really pissed, I could tell. But, I was pissed as well–in the British kind–so I knew that no one was more qualified to talk to this kid about his problems than me.

I walked over, said “Asalaam aleikum,” and mumbled some stuff that sounded like Arabic.

“I speak English,” he said.

I told him my name, said he looked angry, and that I would buy him a coffee. We went to a cafe nearby and, when I went to pay, I saw that someone had stolen my wallet. Joke was on them though; the only thing in there was a five-pound note. Ha.

So the kid paid, we sat, and he went on a spiel about how the government was unjust, and how they weren’t looking out for the best interests of the people, and other boring, dull shit like that. “You know,” I said, not entirely sober yet, “you know what you should do? Fuckin set yourself on fire, man. Prove a point. That’s what that Buddhist dude did in Vietnam and, like, the next day? War’s over.”

“Hey, would an American lie to you?”

Soon after that, I hopped back in my Yugo, pressed the button, and passed out. Went to Noshville the next day and had a kickass hangover-kicking breakfast. Then, a few days later, saw the headlines and said, “Oh, no.”

So, once again, sorry everyone.

One thought on “Taking Responsibility”