The Horrors of Writing

Don’t get me wrong, writing’s a blast. It’s one of the things that keeps me from becoming a total madman, drooling over myself in a corner somewhere, murmuring about paranoid delusions more than I already do. In that respect, it’s an incredibly important part of my life.

It’s also a way for me to entertain myself. I’m pretty sure that I’m entertaining other people with my writing,  but it would be awfully presumptuous of me to assume that everything I write results in anything more than a quick breath through the nose and maybe a nod of the head.

All of this has been brewing in my head since, oh, January of last year, when I was recuperating from Scarlett Thomas’s weekly realist lecture. (She called it tutoring in the Creative Writing M.A., but it was really just gushing about how we should all be like Tolstoy.) I started thinking, “Why did I decide to go for an M.A. in Creative Writing?” I could have done anything that wasn’t in the sciences. Fuck, anthropology’s cool. I could’ve gone into anthropology.

Anyway, I finished the degree, and the really good part about it was that I managed to get a rolling start on Cloyd, which is now finished and is in the drafting-cover-letters portion of its nascency. But the doubts keep coming, which I guess is a good thing. Overconfidence is a weakness, as Luke Skywalker said before being electrocuted by Emperor Palpatine.

So, Dear Reader, I come before you today to list all the things that are horrible about writing. If you want to be a writer, think of this as a warning. You will experience all of this, but if you actually care about writing–for whatever reasons that make it important to you–then they shouldn’t stop you. Think of it like drinking: While you’re doing it, it’s amazing; but the next day, as you’re heaving over the toilet for the nth time, it’s terrible and something that should be banned by the Constitution. That doesn’t mean, however, that you won’t be back at the bar that night.

Most of Your Ideas Will Suck

I should keep a running tally of my ideas. Some of them have been pretty good: Boy leaves home behind, is exposed to real world at behest of talking apple named Apple. Some of them have been total shit: Check this shit out, the Romans, shut the fuck up and stop laughing man, this is great; the Romans are, like, in fuckin Egypt right? And there’s demons everywhere, right? And, dude, shut up, the demons are, like, conjured by the Carthaginians and fine fuck you, you troglodyte.

I take that back, I’d say a good 60% have been total shit. Maybe not as bad as the above example, but pretty Godawful and unworkable. Once I sent Jon Lim a one-panel comic that had a punchline of: “Not much, just forging some dicks!” It was born out of an extreme caffeine high, and while I thought it was hilarious, literally no one else alive would. Luckily, we worked with it and you’ll see it at Denim Trousers in, roughly, six months.

If you’re observant, that should trip something in your mind. Just because you have a Godawful idea doesn’t mean that there’s no hope for it. There’s always hope, unless you’re expecting Coen Brothers-quality from a Michael Bay film.

Of course, that’s not to say you’ll always have the solution at hand. Chances are you won’t think about it, since you’re the one who birthed the slight against literacy in the first place. I’d bet that if the Mormon Church encouraged reading literature, Stephanie Meyer (I know that’s not how you spell her name, I just refuse to give her respect) would have realized what she was doing was wrong. This is why you need other people around you; people who are, basically, your group of test readers.

Which brings me to our next reason writing really, really sucks.

You Will Get Terrible Feedback

This isn’t really the fault of your group of readers. We live in a society where reading is relegated to weirdos on the bus and academics. (Though those distinctions are interchangeable.) Bring up Kafka to someone who reads Twilight and their eyes will glaze over in three seconds. Though if you talk about the Metamorphosis, they’ll probably say, “Ew, a roach? ;(”

It’s a necessary evil, this finding your group of test readers. It will take a long time, and during this long period of trial-and-error, you will learn things about your friends that you might otherwise not want to know. For example, one of your friends might only read Halo novels, and think everything else is a novelization of a movie. Or another one of your friends might only want to read things that are like Jane Austen. The list of disappointments goes on, and it’s only ammunition to add to the fire during Festivus.

You’ve probably been thrown by that inclusion of a Seinfeld clip, and I apologize, but it’s extremely funny anyway.

I think the best way to illustrate what you’ll be looking at in terms of finding test readers is with a graph. So here you go. 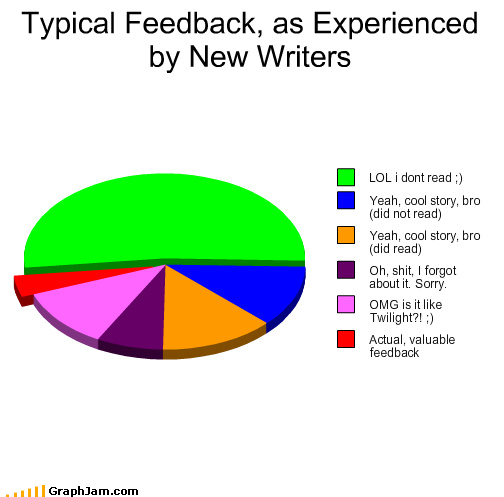 The trick, you notice, is finding that group of people in the red. They’re your test audience; they’re the sorts of people who read something other than the horoscope on Yahoo’s front page or the cover of Cosmo. These are the people who you want to be your future writers and critics and, as you can see up there, they’re very rare.

That’s the state of affairs you’ll be dealing with, though. In a poll by Simontek Polls (a division of Simontek Industries and in no way reputable), it is shown that only 2% of Americans know there are more than five authors writing books today. 1% of that 2% actually reads any of the other authors. But you must persevere. That is the only way you can succeed as an author, and if you can last through finding test readers, then you can last through finding the next, more depressing step.

You will be rejected a lot. All of these rejections will make you want to stop writing and, if you get enough of them in a row, hang yourself. It gets worse when you consider the vast amount of periodicals out there. Even the act of looking for a magazine gets soul-crushing as you have to wade through everything to find something that’s a) not erotica and b) relevant to your story.

A lot of people will suggest subscribing to magazines; and you should. But let’s be honest, you want to be a writer. You’ve taken an entry-level job “just to pay the bills while I write,” and entry-level stuff doesn’t pay well. With the amount of debt you’ve probably accrued, you can’t afford to keep buying books at the rate you are (I’m on to you) AND subscribe to more than two or three magazines at a time. At this point, it becomes a crap shoot. Best of luck to you, because I haven’t found a fool-proof method. (If you do, please tell me.)

The only positive advice I can give you on submitting is follow the editor’s instructions, no matter how inane they might seem, to the letter. This is how editors see if you’ve been paying attention. You might slip up from time to time, but purposely not reading the submission guidelines because you’re above single spacing and writing in Cambria is plain stupid.

Positive aside, the rejections shall flow like Niagra Falls (or, better, Iguazu Falls). You will look upon them and despair. You will think that you are the worst writer ever, because why else would you get so many rejections. The world will become a dark place, and you shall hear the sixth seal being opened.

But then, eventually, you’ll get the first paying acceptance and you’ll start to think that you might be able to swing a living from this after all. The clouds will part, the angels shall blow a flourish upon their polished trumpets, and yadda yadda yadda clichéd heavenly imagery.

But then you’ll get more rejections, until you’re a Big Time Author, and having you in a magazine or a publishing house will be a boon. And until that time, you’ll, from time to time, be scared shitless of sending something to a magazine, because more rejection on that story you worked on for months will kill you. And that brings us to one of our final points.

Just… don’t. It’s not that big of a deal. Reality’s a fragile shell, money’s inherently fake, and we don’t know what’s going on because we’re caught up with getting a new car, better job, hitting big in investments, what’ll happen on House next week, or publishing the next story.

There’s no sane reason why you should dive for the bottle every time you get rejected. You might feel like doing it, but that’s just hurting you in the long run. According to a Chassidic rabbi who taught me some stuff in Canterbury, the drinking tradition in Judaism is to only drink heavily (really, really heavily–the sort of drinking you’d normally do when your girlfriend leaves you) when something good happens. That’s probably a tradition so that my people didn’t kill themselves via alcohol after the Temple was demolished, but whatevs. Still applicable today.

So, with all of this in mind, fellow writer, dive headlong into the misery. Because what else are you going to do? Go into finance?