So as you probably know, Osama bin Laden was confirmed dead by the White House late last night.

It sent a whole lot of Americans out into the streets to celebrate the man’s death, and a bit of closure to the families of the victims of the Twin Tower attacks. (For the record, I spent the night sending feverish texts out to friends wagering on whether or not President Obama would announce the news dressed as Captain America. I lost.)

From the outside, I imagine that there are two reactions to all of the celebrations: Either a shared elation at the death of one of the people on the FBI’s Most Wanted list; or a sense of confusion at it all.

I can understand the first reaction. I felt it a good amount last night, though that might have been the Scotch more than anything. (Anyone who looks through my Twitter feed from last night will no doubt see one post consisting entirely of the letter E in varying forms and contexts.) 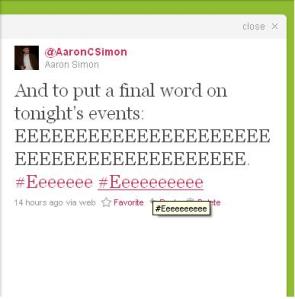 However, as I’ve seen on facebook and many other areas, there is a lot of the second reaction.

People look at the pictures from in front of the White House North portico, or Ground Zero, or Times Square and wonder, compare it to the images of anti-American sentiment welling up immediately after the World Trade Center attacks, and a chill runs down their spine.

Of course, there are a whole shitton (some might say a metric shitton) of differences. I’m going to ramble on for a while about the confusion on both sides. (Well, confusion on one, elation on another.)

Join me, will you?

Objection 1: It Took a Hellalong Time

How come it took so long?!

Let’s consider why people would be so willing to sit back in their hoity-toity know-it-all cynic thrones and say, “Oh look, it took the largest army in the world ten years to find and kill one man. You’re glorifying ineptitude.”

Yikes. Man, you’ve got some… well, not brass cajones, but, jeez. Glorifying ineptitude?

Okay, it did take us ten years to find and kill the man, but the CIA is very, very sneaky and ruthless. I’m not saying that I believe they’ve known where he was in the past and kept him alive for some odd reasons, but I will be using that as an idea for a thriller novel and don’t you fucking take it from me.

The frustration felt abroad at taking ten years to handle one man is understandable. The United States is seen–whether the world acknowledges it or not–as a powerhouse with a big bloody stick. (Upgraded from Teddy Roosevelt’s “big stick.”) How is it bloody possible that a nation with a spy ring that eclipses SPECTRES allowed this guy to live so long?

Why don’t Americans see this? Why are they out there cheering in the streets when they should be berating their leaders for taking so damn long, or not deciding to pull the trigger earlier?

WE GOT THE SON OF A BITCH!

Yeah, it’s indicative of a thoughtless culture that we’re storming the streets after this news. Sure, we should have gotten the guy earlier–and maybe could have–but it’s a tough choice to make. Do you want to combat al Qaeda where they’re operational, or take out their figurehead and turn him into a martyr and possibly add more fuel to the movement.

Objection 2: This Changes Nothing, You Know

How can you think that by killing a symbol you end the war?

Okay, so, bin Laden hasn’t been in direct control of al-Qaeda for a while, a good portion of the threats against America are coming from Yemen, and not a whole lot in the war on terror will change.

It’s all true. Yet again, a large number of the people who want to brutally murder the Western world for perceived crimes against Islam (we’ve really been trying to cut down on the Mohammad-bashing, guys) are coming from the Arabian Peninsula.

And yes, bin Laden’s communications have been tracked so much that the guy did more harm to the Pakistan/Afghanistan al Qaeda branch than good whenever he released statements. So much so that the villa he was in lacked both phone and Internet access–which may have been a tipoff. (Goes to show you: Staying off the grid will get you shot in the face by Navy SEALs.)

I grant you all of that, because it’s all true. The main effect this will have will be to either enrage al Qaeda or open it up to infighting in a power vacuum.

The point is, the work is not done, even though we might initially be led to believe it is. (I remember reading that one official–I think from the Bush administration–said that the war on terror was over.)

In the words of the Marvel Comics terrorist organization, H.Y.D.R.A.: Cut off a limb and two more shall take its place!

SHOT HIM IN THE FUCKIN FACE!

In many ways, a symbolic victory can be more important than a concrete victory. The boost in morale can encourage nations to get behind a war effort in a special way.

In this case, seeing the death of a man who, to many Americans, was the face of jihadist, radicalized Islam, provides a sense of closure to a decade-long struggle for safety in the face of insecurity in a previously (semi) understandable world.

Yeah, it might not actually mean anything, but–what’s that?

Objection 3: Should Have Taken Him Alive

Surely no one should rejoice over anyone’s death

Tricky, tricky. It’s a moral dilemma: At what point do we  think that we have the right to take another human’s life?

I feel like I can justify my belief in not killing by “do no harm.” Others believe that the punishment of a murderer is reserved by God. They point out a quote in Ezekiel, and I’d repeat it, but… well, it’s from the Tanakh. A good portion of the Tanakh, the Torah, invovles God commanding Israel to commit genocide.

You can see where I’m antsy about this. Quoting a book that contradicts itself with so much gusto is a minefield. For every quotation, there’s another contradicting verse. Then there’s the problem of coming off as a religious nut for quoting the Bible in the first place.

Oy. That’s why, in my opinion, it’s better to go with “do no harm.” Life is hell in the first place, why should you cause hurt to another person–even if they’ve wronged you in the past?

There’s a lot to be said about that. Violence breeds violence, and to celebrate violence is pretty damning, because you’re inviting the hatred of a whole lot of people–look at Americans’ reactions to Palestinian street parties after 9/11.

So, how’s it feel, knowing that you’re just as big of a bastard as the person you’re decrying, dancing around, celebrating like that.

You’ve… you’ve got a good point there.

Well, hey, people need closure. It’s a shame that the guy couldn’t have stood trial, but what do you expect when you unleash the SEALs on people?

UPDATE, 5/4/2011: Geffrey Robertson at The Independent has a well-reasoned opinion piece about the manner in which bin Laden was killed, and what it means for a nation to so embrace capital punishment instead of trial-by-jury.  Good read, no doubt.