Wherein I Apologize for My Actions, Pt. 2 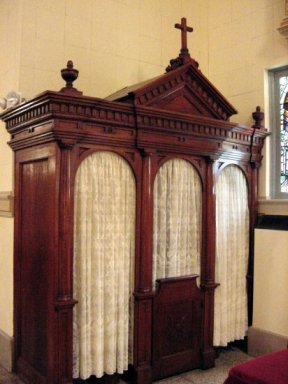 So. This is awkward.

I bet you don’t even want to hear from me, the person you referred to as “Spawn of Satan” and “get thee gone” and “what the fuck is wrong with you.” Well, in your position, I wouldn’t want to hear from me, either, but I would also want some sort of closure on our ordeal on Wednesday evening. And while I know this won’t be enough to make up for the damage I caused you, know that I think of what happened as more of a balancing of accounts. You made my life miserable for three months by starting up inane conversations on the bus, I made your life miserable for one night.

I guess I should start at the beginning. Baldy: I’m sorry for calling you “a senile fearmongerer” when I first got on the bus. I wasn’t aware that, at 3:45, I was on the 3:30 bus, and you’d barely made it half a block. Also: I’m sure you’re not senile. Though you seem to be well past the legal age of retirement, the fact that your bald pate is so smooth and shiny speaks volumes of your hygiene; as I imagine that it’s impossible to keep your health up while senile, you probably aren’t senile. You’re still a fearmongerer for insisting we “wouldn’t get out of downtown alive,” though.

Screeching Harpy #1: I’m sorry for chucking my shoe at you. It wasn’t the most mature of actions, but we’d been on the bus for half an hour, and had barely made it past the block in front of the bus station. I was a bit stretched for nerves. The fact that you’d been shrieking “The Wheels on The Bus” as if it were the most hi-fucking-larious thing you could have done was infuriating, and the fact that you’d been screaming so loud I could hear you over Metallica at full volume didn’t help either. In addition, I also apologize–barely–for saying “I will spit on your grave when you die.”

Morbidly Obese Businessman #1: I know you were hungry, man, but the Subway was literally ten yards in front of our bus. You didn’t have to keep repeating, “Hey driver, think you can squeeze up a bit so I can get a sandwich” every five minutes. I could have chopped off my legs at the knees, ordered a sandwich, and still made it back to the bus before it moved. All that said, “Want me to roll you down the sidewalk?” was the wrong thing to say.

Teenage Couple (first apology): An hour into the ride, about the time we were two blocks away from getting on Broadway, I walked over to your seat, squatted, and said, “Did you come here to ride the bus, or did you come here to have a fucking date? Shut up.” I’m sure you were just friends, and that this was just my rage at not being able to go home and play WoW lashing out.

German Girl: Sorry for muttering, “Kraut” under my breath incessantly when you got on the bus. That was wrong. I would never usually do that–really! I wouldn’t! I have some German friends/acquaintances!–and it was more a reaction at, once again, spending an hour and a half on the bus with a bunch of brainless state workers who were complaining about not catching their “stories” on TV that night.

Bus Driver: Sorry for insisting that you give me the MTA Director’s home phone number so I could “do horrible things” to him. I’m sure you don’t know the Director, and I’d like to thank you for not reporting me to the police. It was a tough time for all of us, and as you sat in the middle of the intersection of 12th and Broadway, being honked at by everyone, and caught in gridlock, I’m sure this was the last thing you wanted to hear.

Control Freak in The Vols Jacket: Sorry for flying off the handle when you said, “Please go sit down. I’m helping the driver navigate this, and you’re scaring everyone. Look, you made that woman cry.”  I should not have called you a “plebeian,” a “troglodyte,” “a Neanderthalic sub-mental barely able to make sense of a stop sign,” and many other things. Moreso, I should not have assumed that you did not go to UT, and were just wearing the jacket–though I was right, it was wrong to say, “You couldn’t get into that barely-functioning hellhole even if you donated a million dollars.”

Screeching Harpy #2: Two hours and fifteen minutes into the ride, you kept repeating some damn story about the one time you were in Ohio and it snowed. No one cared, but it was wrong of me to go in your face and start quacking like a duck, saying afterwards that your “incessant yammering was Orwellian duckspeak of the finest caliber, a true testament to the depths to which our society has sunk.”

Everyone: Three hours in, right after we slipped off the road for the third time, I started shouting, “SHUT UP! SHUT UP! NOTHING WILL HAPPEN IF YOU DON’T SHUT UP!” Obviously, that was illogical. I was just really, really upset at literally everyone on the bus for treating this like it was the best thing ever, as opposed to, well, a horrible inconvenience that was the result of what seemed to be worthless tires.

Morbidly Obese Businessman #2: I apologize for calling you a “rat fink” and “a nogoodnik” after you tried to move everyone to the back on the belief that it would help the bus grip the road. Also, I’m sorry for saying, “Your mass, similar to a black hole, should be enough not only to give the bus traction, but to collapse the bridge.”

Everyone inside the West End Jack In The Box: I apologize for making lewd motions at, and on, the windows. In my defense, you shouldn’t have locked the doors to other people–you had a captive pool of customers outside in idling cars, and you chose to lock the doors on them. You should all be fired for such lack of business sense–and that’s coming from an avowed socialist. Further, I apologize for swearing by the black gullet of Lord C’thulhu that you would all receive comeuppance. That was nuts.

So yeah, all told, I can understand why you guys locked me out of the bus when I went to get some food. Still. Low blow, guys. Low blow.

One thought on “Wherein I Apologize for My Actions, Pt. 2”