How To Take Down The Commies 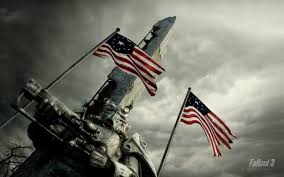 They want this to happen

A while ago, I had a column in the University of Tennessee’s The Daily Beacon. It lasted a semester, and I was kind of surprised when they said they wouldn’t need me around for the Spring semester. I had what you might call a cult following. (Occasionally, someone who looked like they should be in an art class came up to me and said they thought I wrote some funny stuff.)

My columns were essentially nonsequiturs. I didn’t have any desire to report on campus politics, and whenever I talked about what was going on in the Outside World, it was done through heavy satire and a very sarcastic tone. In my defense, the editor never told me that the column had to be about anything. (Never told me anything, now that I think about it.)

No, what concerned me was pop culture and its prevalence in our lives as students. A couple of years before I went into college, my brother made me watch Red Dawn. It was two years before I could talk about it, and, when I finally got over the shock, I found that the only healthy way to express my feelings was via newspaper column.

I was bored the other day, so I decided to take a longish meander throughout my movie collection. Specifically, the masochist in me wanted to take a look through the box marked “Absolutely terrible movies- abandon all hope, ye who enter here.”

After I thought about how needlessly over-the-top that marking was, I opened up the box and chose a movie at random. The one I held in my hand was called Red Dawn, and I should have laid down the movie when one of the voices in my head said, “Get out!” but I tend to be a somewhat stubborn man, so I plopped down and watched it on my computer.

In case the reader is lucky enough to not know this movie, I shall give a brief synopsis.

The basic premise is that every Communist on the face of the Earth agrees to invade the United States. This begins with the ultimate in every high schooler’s nightmares: paratroopers invading high school football fields across the nation.

Turns out that the Armed Forces are completely helpless to stop this, so the country is duly taken over in a matter of two weeks, the majority of the population placed in reeducation camps, and the only resistance to the dirty Commies is a group of teenagers led by one of the Estevez brothers (It doesn’t matter which one, since apparently every male in that family is required by the Constitution to act in at least one terrible movie).

Of course, the teenagers manage to defeat the Communist threat, and all is hunky-dorey.

Which leads me to the reason I blacked out upon analyzing this movie. How insecure of a nation are we that we need to make a film in which the protagonists are high school students who manage to defeat Communism?

The answer: pathetically insecure. This slightly more adult version of G.I. Joe replaces Cobra with a suave Cuban who, and this is the terrifying part, communicates perfectly well with his Russian-speaking superiors.

Apparently, the Red Threat was still extremely strong in the Eighties, so strong that we needed a film that showed how to defeat the Communists and secure democracy once and for all.

In case the reader is wondering, the formula for defeating Communists is fairly simple. First, procure a truck bed full of weapons, making sure to get the minimum amount of ammunition possible. After this, flee to your nearby woods or mountains and set up camp where you will needlessly wait for a few days.

This next part is optional. If there is a female in your ragtag group of vigilante justice, be sure to tell her to sit the battle out, thus asserting the male chauvinistic attitude that won us World War II.

From there, it becomes even more obvious. Make a run to town, specifically the base camp of the Commies, and wreak massive confusion amongst the poorly trained and extremely stupid group of Cubans, Russians, and possibly Chinese. Your victory from that point on is inevitable.

I’d go on, but you should know how it ends from there.

Apparently, this insecure nature of ours is popping up again in response to the poorly-thought out war in Iraq. In a version of propaganda that may or may not be sponsored by the government, there is a film coming out starring the wrestler John Cena (who is apparently some sort of wrestler for the People).

In this film, we see the vast superiority of the Marines. Cena has a sort of Rambo-like relapse and loses his mind, resulting in many pleasing explosions and, once again, showing the inability of the local authorities, personified by Robert Patrick, when confronted with the vast, superior military machine that is the American Marine.

Not that this sort of thing is bad, it’s just a little troubling that history must repeat itself in the form of such utterly horrible movies.